Depression has become on the greatest threat to the mental health statics today. In recent research, it was found that most of the deprivation of the workforce in America itself is the result of mental illnesses like depression anxiety neurosis. But the reality is much faster and heavy – hearted where most of the cases remain unreported or unnoticed due to the negligence of either from family members or self. But with the passing by the time these conditions are changing with the increasing awareness of the society toward these issues which are latent but effects are like a silent time bomb which can explode at any time and has long-term effects on the being of the individual.

In the current situation we have many conventional medicines available for depression but one is useful to those with restricted effects and more limitation and much more side effects, people are moving towards more safe and gentle ways to treat these as they have already faced a lot of turmoil due to their illness and can not afford more sufferings and in these scenario therapies like yoga, reiki, taichi come int picture which soothes and heals the individual without tearing up the vitality or slowing down the body function that is generally happening in the western medicine system. 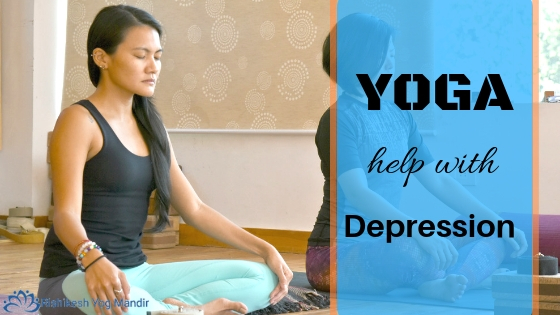 How to do yoga for depression

Many methodologies of yoga like pranayama and medication are helpful in treating depression. In science like yoga, It is believed that one can use the inner consciousness to control the energy from the universe and the supreme energy to connect it with the understanding of insight with the help of meditation and achieve a healthy body and quite calmer mind. Yoga for depression is proving its point as many people are being benefited from it.

Even in Old Sanskrit yoga text Patanjali in his text of Yoga Sutras we can find the mention of meditation as a method of attaining higher states of self-consciousness and awareness which ultimately helps us in the finding a better option to living life that is how yoga help with depression; it also mentions the holding of the focus or diverting the negativity accumulated within us with breath regulation as the important practice of reaching meditation.

A regular practice can lead you to the path of the true essence of the treatments and how each and every aspect of life and its working is linked to each other.